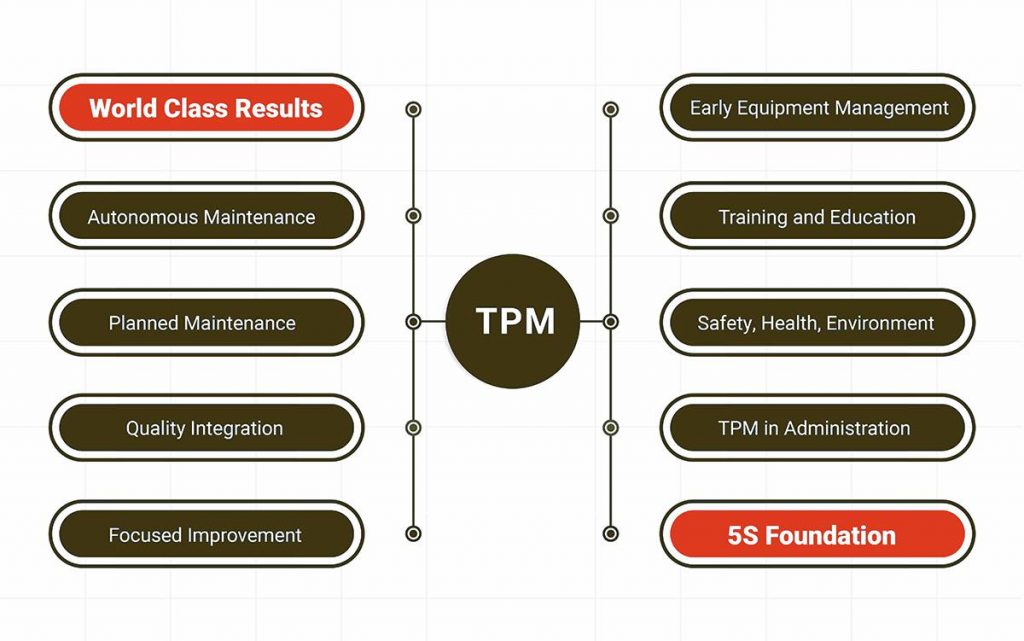 Between 1950 and 1970, Japanese companies invested a lot of time and attention to fine-tuning manufacturing. They discovered the key was empowering small groups of frontline employees in improvement projects. In 1971, Seiichi Nakajima formalized this and other insights into Total Productive Maintenance. Japan’s most famous contribution to manufacturing practices, JIT (just-in-time manufacturing), stems from and depends on TPM principles and practices.

TPM today can be broken into two sections, first the 5S foundation and then the eight pillars. It’s worth going through each part to get an idea of how the system works as a whole. The goals of TPM perfectly match some of the main goals of every maintenance department:

Although the original words are Japanese and there’s more than one possible translation for each, they tend to be presented as:

Let’s look at each one. Keep in mind that they’re sequential and self-referential. You need to do them in order, and later steps refer back to earlier ones.

This makes everything less cluttered, and clutter slows you down. When you’re looking for a part, you can find it faster when there are fewer other parts around it. Why is it so hard to find a needle in a haystack? It’s because of all the hay.

Besides making everything faster, it can make everything safer, too. If the floor around an asset is clear, you’re going to notice any leaks that much faster. Visual inspections are easier and problems become detectable sooner when there’s less stuff around, blocking your view.

Once you’ve gotten rid of all the stuff you don’t need, you need to organize the stuff that you do. You need to put tools and materials in locations that support your workflow. For example, put tools on the workbench in the order you’ll use them. If you’re not always using the same tools in the same order, position them so they’re easy to find.

A great advantage to this is that it becomes really easy to see when something is missing. If all your wrenches are arranged along a wall in order of size, you’ll instantly know when one is missing.

Basically, this step is all about “A place for everything, and everything in its place.”

Now that you’ve got everything set up nicely, you’ll need to fight to keep it that way. The shine step is all about regularly taking time to clean and make sure everything is where it should be. While cleaning, you should also be inspecting the tools and machinery to make sure everything’s working properly.

Here you’re going to take it all a step further to make sure your hard work doesn’t get undone over time by creating formal policies and a set schedule for the first three steps. For example, you can set policies about who is responsible for which areas and then schedule the last 15 minutes of every shift for “shining.”

Heavy-handed top-down management tends to work right until the manager goes home for the day. For the 5S system to really work, you’ll need employee buy-in. At this step, you can organize training sessions that help workers understand the benefits of the system. You can also gather employee input; workers will be more excited about implementing a system they helped develop.

Now that we’ve got the foundation, let’s look at the eight pillars. They’re a bit less interconnected that the 5Ss. You can do any one without the others, and you can do them basically in any order.

Looking at the phrase now, you’d think it was about artificial intelligence in CMMS and thinking robots. But remember the system was formalized back in the 50s, and back then it referred to the practice of operators taking over responsibility for routine cleaning, inspecting, and lubricating their equipment. Instead of the maintenance department, operators were responsible for all the little PMs associated with equipment.

A big advantage is it increases the operators knowledge of the machines they work on. It’s important to know that the expectation is not that they’re going to become experts. Thinking about it in terms of owning a car, they’d know how to check the oil (but not change it) and add air to the tires. So, if something goes wrong with the equipment, they’re going to notice it pretty quickly. Also, because they’re able to take care of the little things, the maintenance department techs, who are actual experts, spend their precious time on more important, more complex repairs. Back to the car analogy, your mechanic should be checking seals and adjusting the idle. If you have them vacuuming the back seat and putting air in the tires, you’re wasting their time and talent. You’re also wasting your money.

This one is easy to explain. It’s just preventive maintenance by another name.

One of the benefits is that you can plan preventive maintenance around busy times. Instead of having the line stop in the middle of the first shift with a catastrophic failure, you can get your inspections and routine replacements all taken care of between the second and third shifts, when things are relatively quieter.

A big part of this one is root cause analysis. Instead of just fixing a problem, you also figure out what caused it so that you can avoid it in the future.

Typically, you’ll hear people talking about the 5 Whys when doing this sort of analysis. It’s important to remember there aren’t 5 Whys. Instead, the idea is to ask “why” five times to get to the root of the problem. And we need to find the root; otherwise we’re just wasting our time working our way down an endless list of recurring symptoms.

For example, let’s say the problem is your car won’t start.
One: “Why won’t the car start?”
Answer: The battery is dead.

Two: “Why is the battery dead?”
Answer: Alternator is not functioning.

Three: “Why was it not functioning?”
Answer: The belt was broken.

Four: “Why was the belt broken?”
Answer: It was long past its useful life.

Five: “Why was an old belt still on the alternator?”
Answer: The car was not being maintained according to the manufacturer’s recommendations.

Is it always five? Not always; five is just a good rule of thumb. 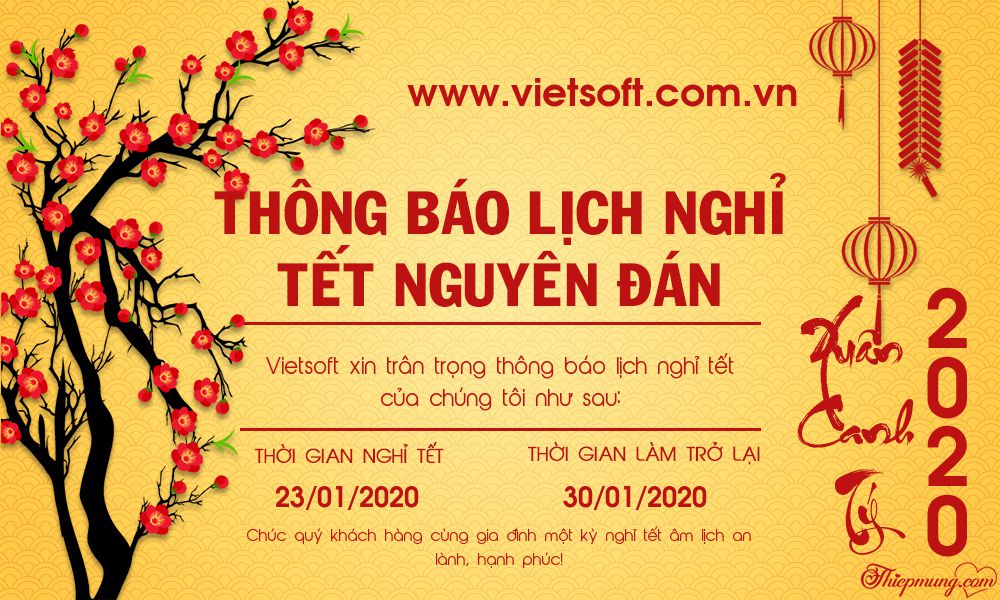 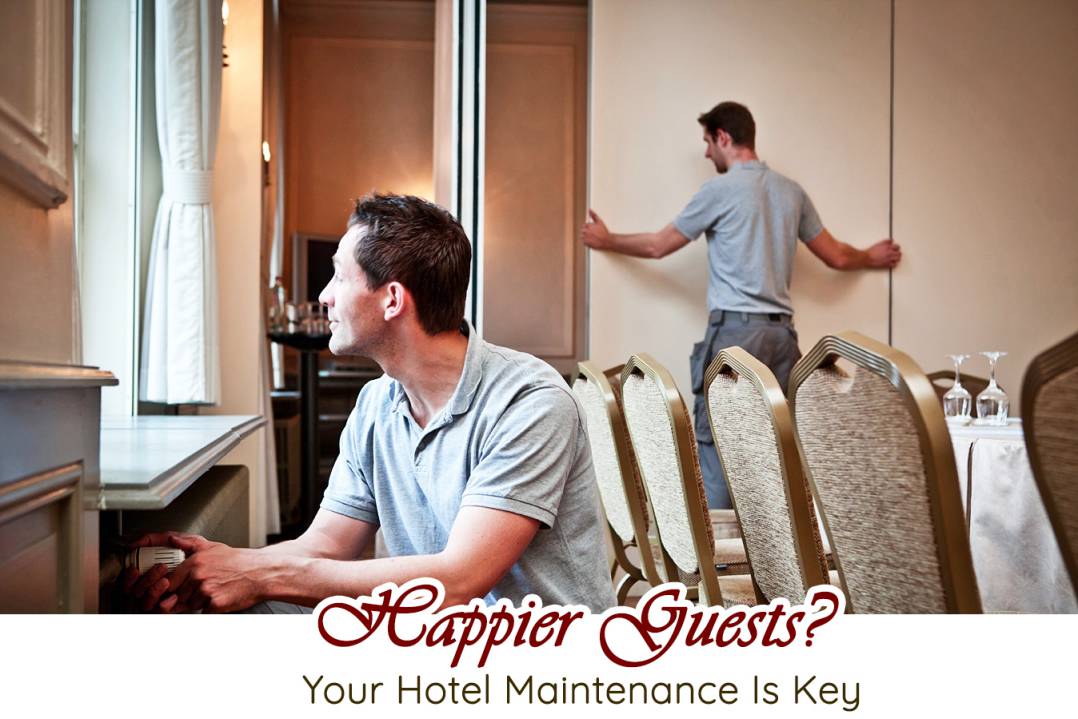 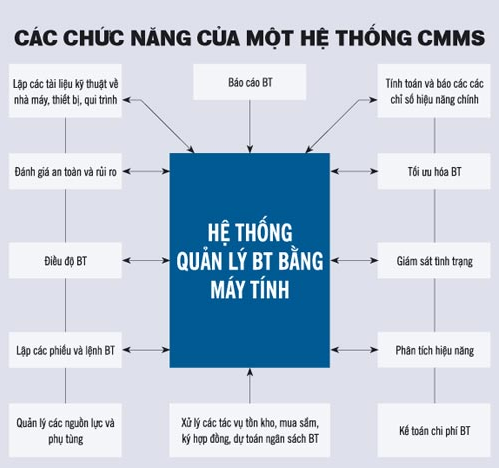